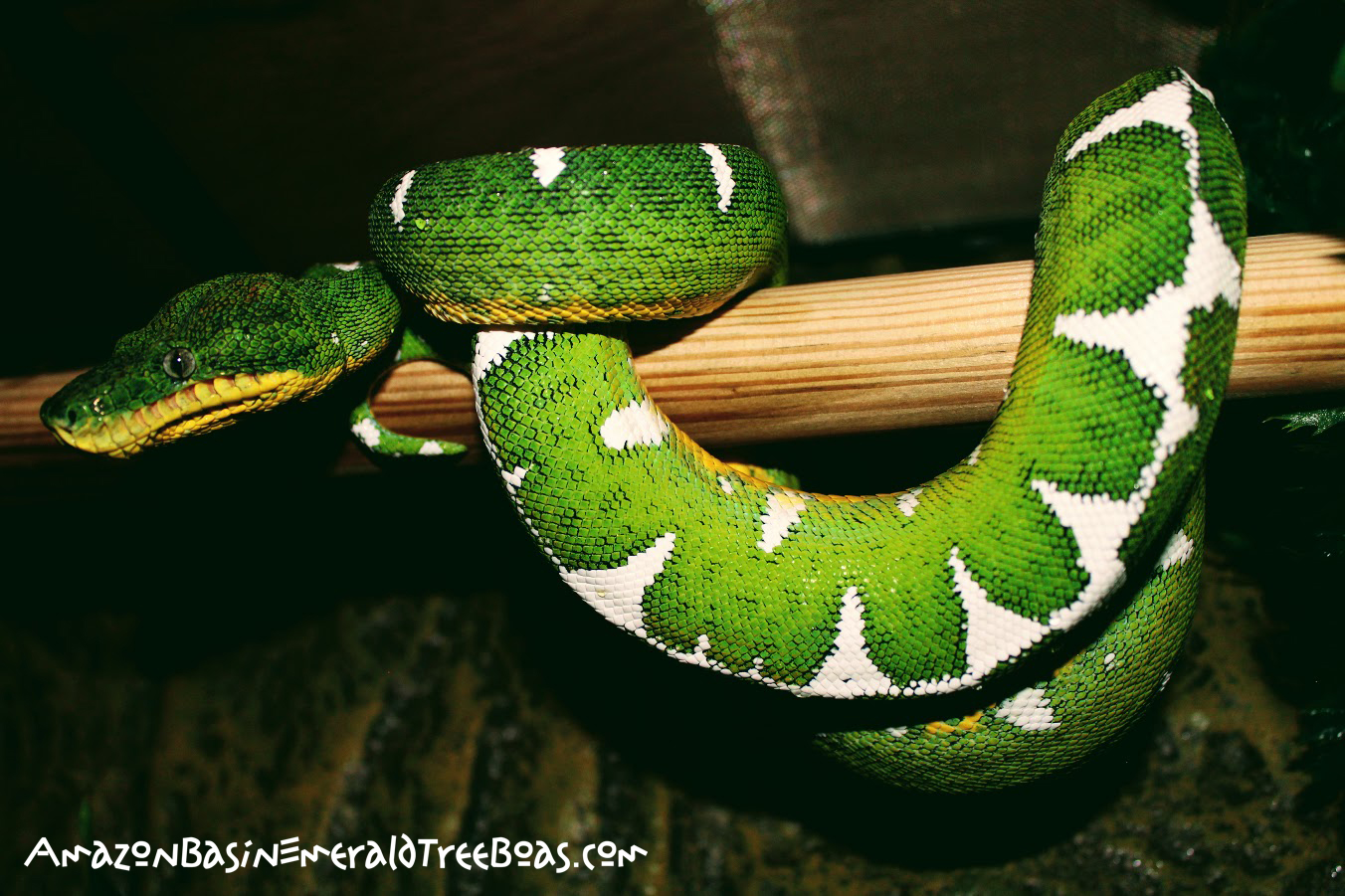 The Emerald Tree Boa is a species of arboreal Boa discovered in 1758 by Carlos Linnaeus. Carlos originally named the emerald tree boa, Corallus Caninus.  Corallus, the genus name comes from the coral-like color of this species. Caninus comes from the snake’s head, snout and canine teeth which resemble a dog.

Northern Emerald Tree Boas are smaller in size, length and girth, averaging 4-6 feet long. Whereas the Amazon Basin Emerald Tree Boas are much thicker and average 7-9 feet in length. The Northern is shiny light green with white lateral markings that show down the back of the snake with a creamy white belly. The Amazon Basin is a darker green shade with white triangular or diamond shaped markings that protrude from the white dorsal stripe that goes down the back of the snake, with a yellow belly. Both species live to 20-30 years of age. 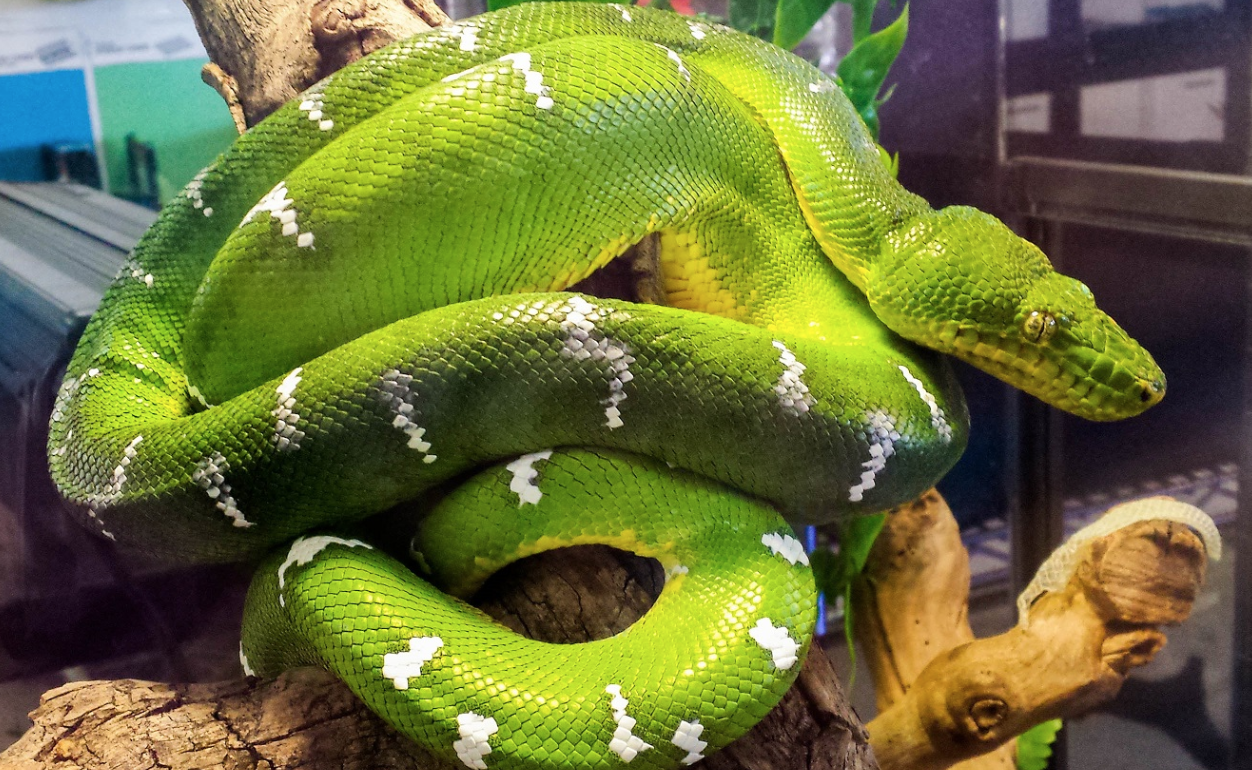 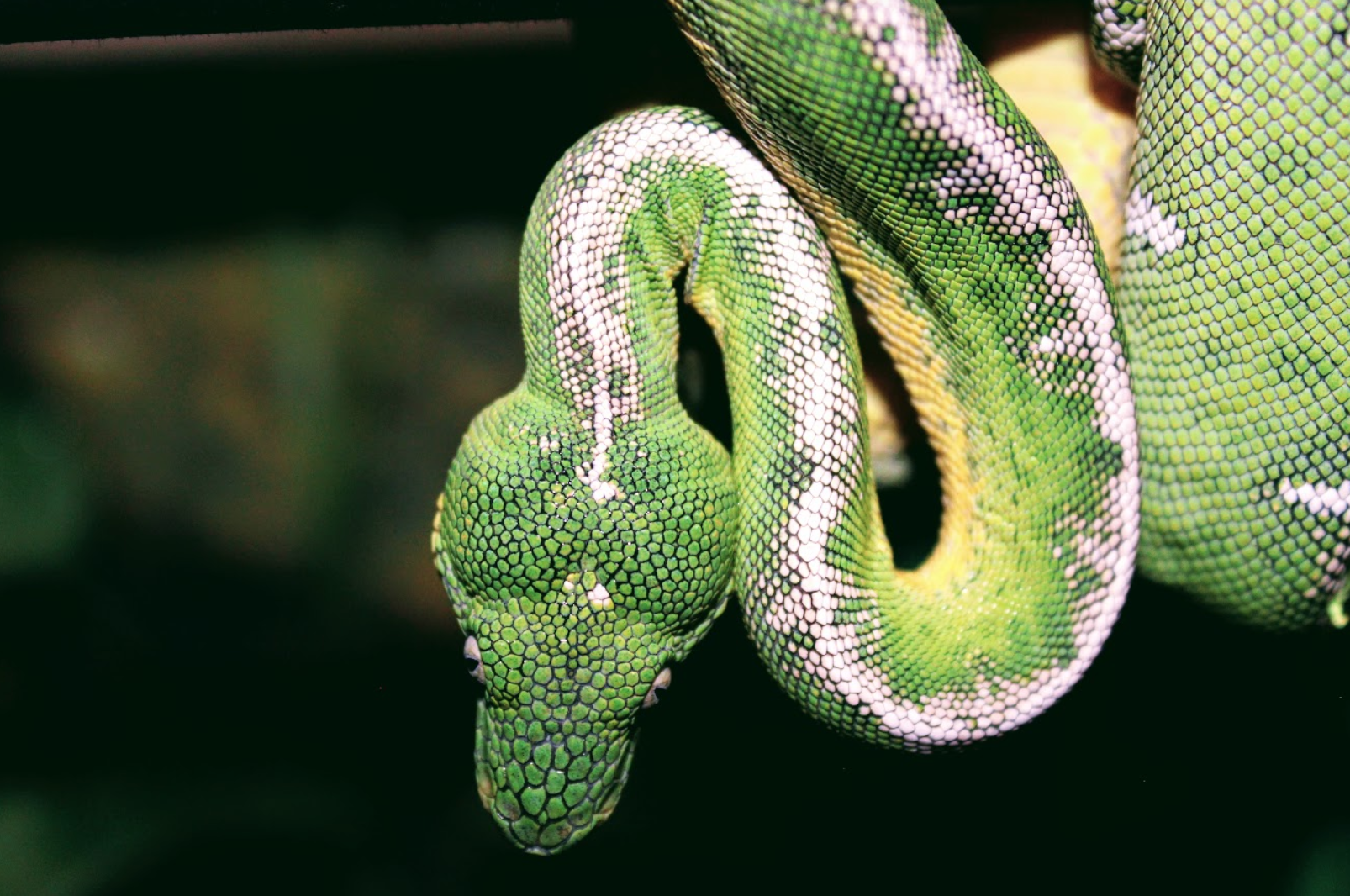 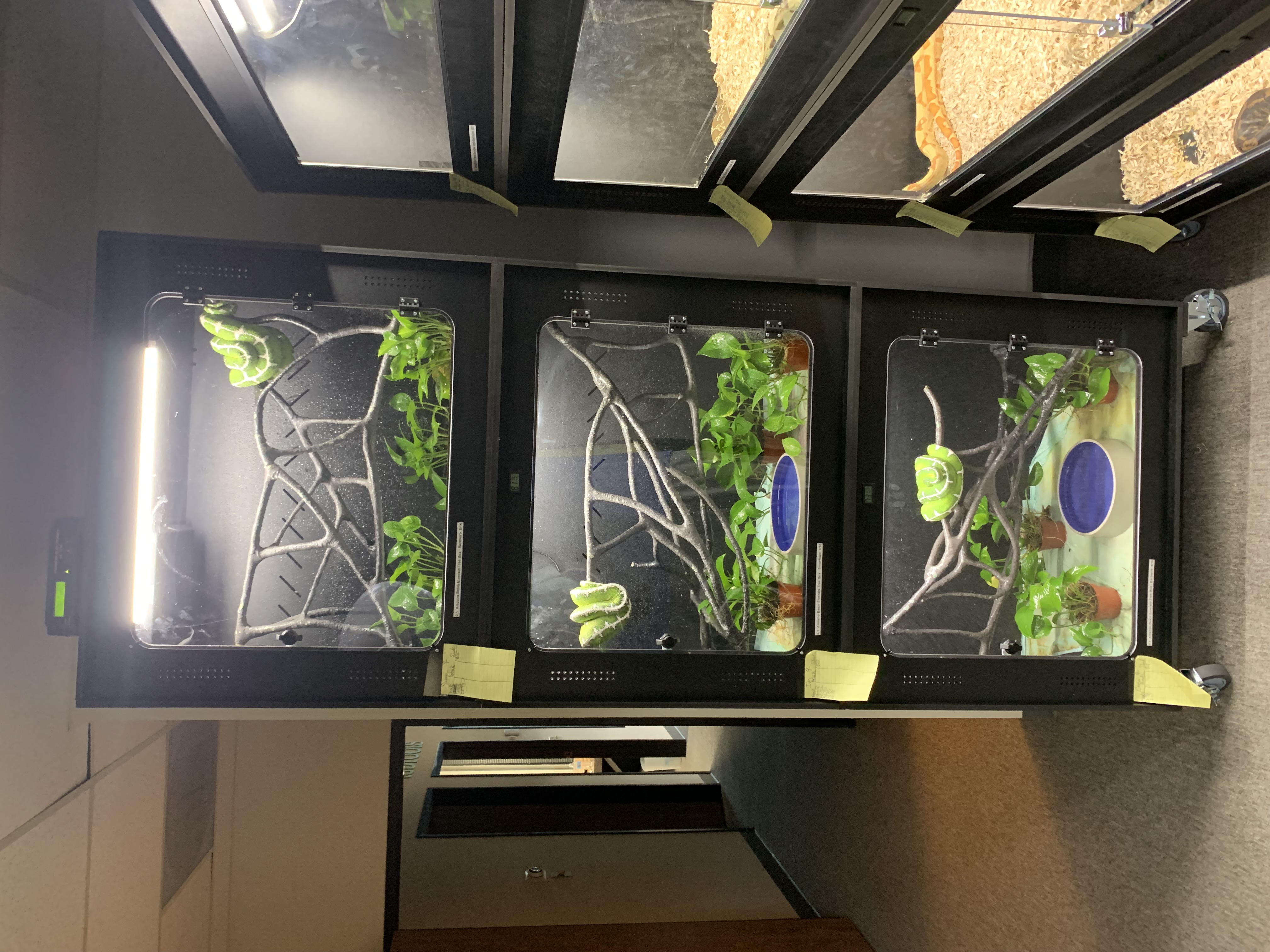 Our terrariums range in the size and type, depending on the age and size of the emerald tree boa. The neonates stay in the Mini/Tall Terrariums measuring 12” x 12” x 18” (WxDxH). The juveniles are moved to Small/Tall Terrariums measuring 18” x 18” x 24” (WxDxH). As the juveniles mature and grow in size then are moved to the larger Medium/Tall Terrarium measuring 24” x 18” x 24” (WxDxH). The adult emerald tree boas live in the Large/Tall Terrariums measuring 36” x 24” x 30” (WxDxH). We keep the terrariums together based on size, stacked on three leveled racks. The Exo Terra Glass Terrarium are ideal for the younger neonates and juvenile amazon basins, specifically for arboreal boas who live off the ground.  These cages are naturally tall giving our amazon basins the ability to climb. The terrariums front opening doors allow for easy access for maintenance and feeding. The top of the terrariums is full screen for ventilation and UV penetration. For emerald tree boas, this can also create problems for humidity reasons. To solve that issue, we cut plywood to properly fit the top screen sections, leaving one section open for ventilation and the white light/red light fixture. The adult amazon basins are moved to the larger terrariums that we had made by Boa Masters. You can see in the photo to the left showcasing the adult basin enclosures.

Each terrarium is setup with a Day/Night Tropical Lighting Kit made by Zoo Med. The Lighting Kit has a white 25-watt Repti-Basking Spot Lamp, and a red 50-watt Nocturnal Infrared Heat Lamp. During the day, the white light is set to run most of the day from 7am to 6pm, although will turn off if the temperature exceeds 85 degrees fahrenheit. The snake room is well lit with plenty of natural sunlight. During the evening, from 6pm to 7am if the temperature drops below 73 degrees fahrenheit, the red heat lights will turn on and bring the temperature back up. The lighting systems are controlled to run these day/night cycles by the ReptiCare® Terrarium Controller made by Zoo Med. 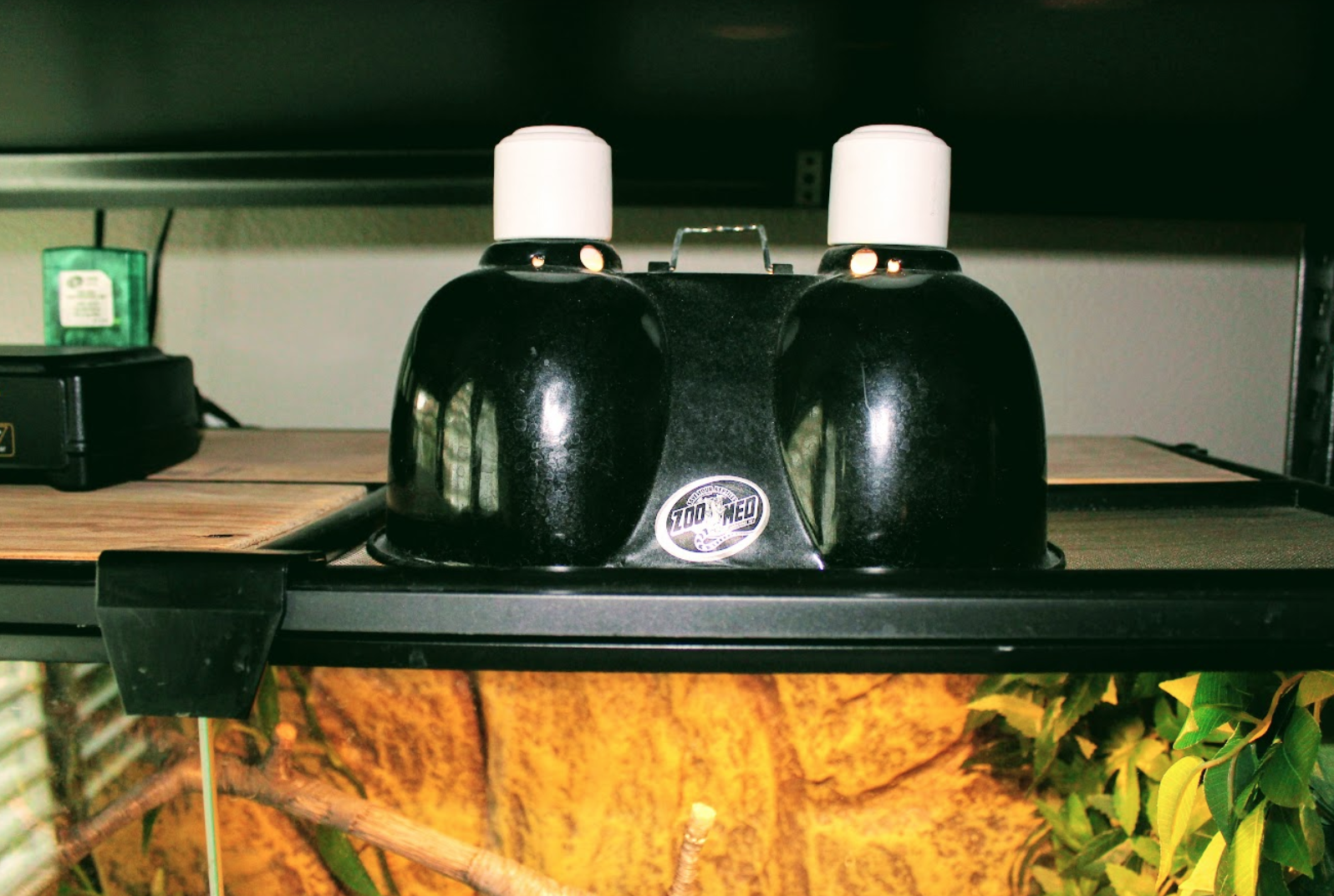 We live in Southern California where the average temperature is 77.1 degrees, and we keep the snake room temperature at 81 degrees. So unlike other areas of the world, where snake owners have trouble with temperatures, we don’t have that problem. Without much temperature manipulation, we can maintain a daytime ambient of 83-85 degrees and a nighttime of 75-78 degrees. For temperature control, we use Vivarium Electronics VE-300X2 Thermostats. Each rack of same sized cages has one thermostat to maintain the temperature control over all terrariums. 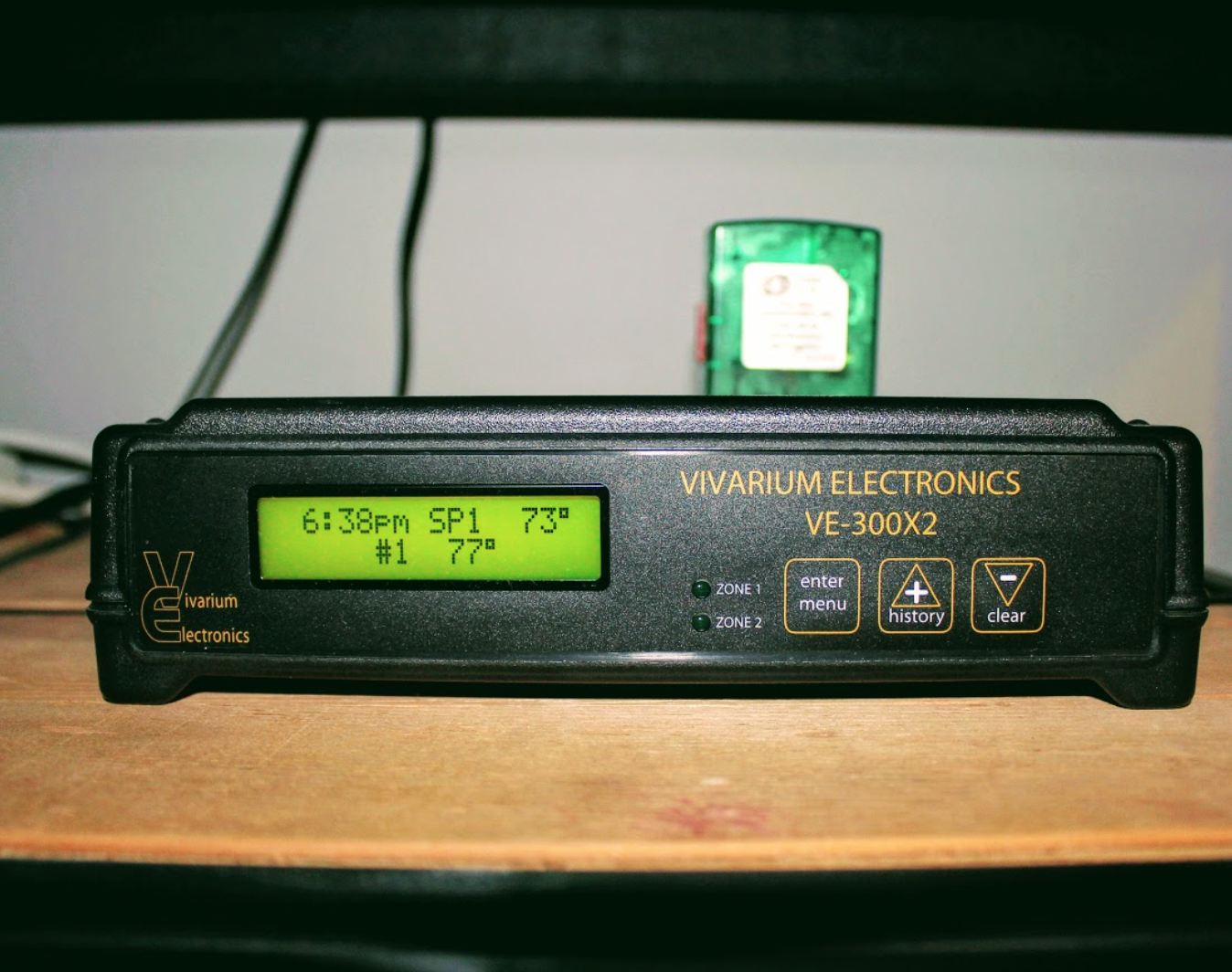 Emerald tree boas require a specific temperature and humidity range to maintain good health. If the temperature if too high or low, that could cause digestion problems. If the humidity is too high, that could cause respiratory issues. To achieve the proper humidity of 70-80%, we mist the cages once per day at 4-5pm using a 3 gallon compression pump sprayer. The entire cage must be sprayed, including the flooring substrate and plants.

For humidity reasons and to create a better environment for the snakes, we use fake plants that stick to the side walls of each terrarium, and live pothos plants at the bottom of each terrarium. 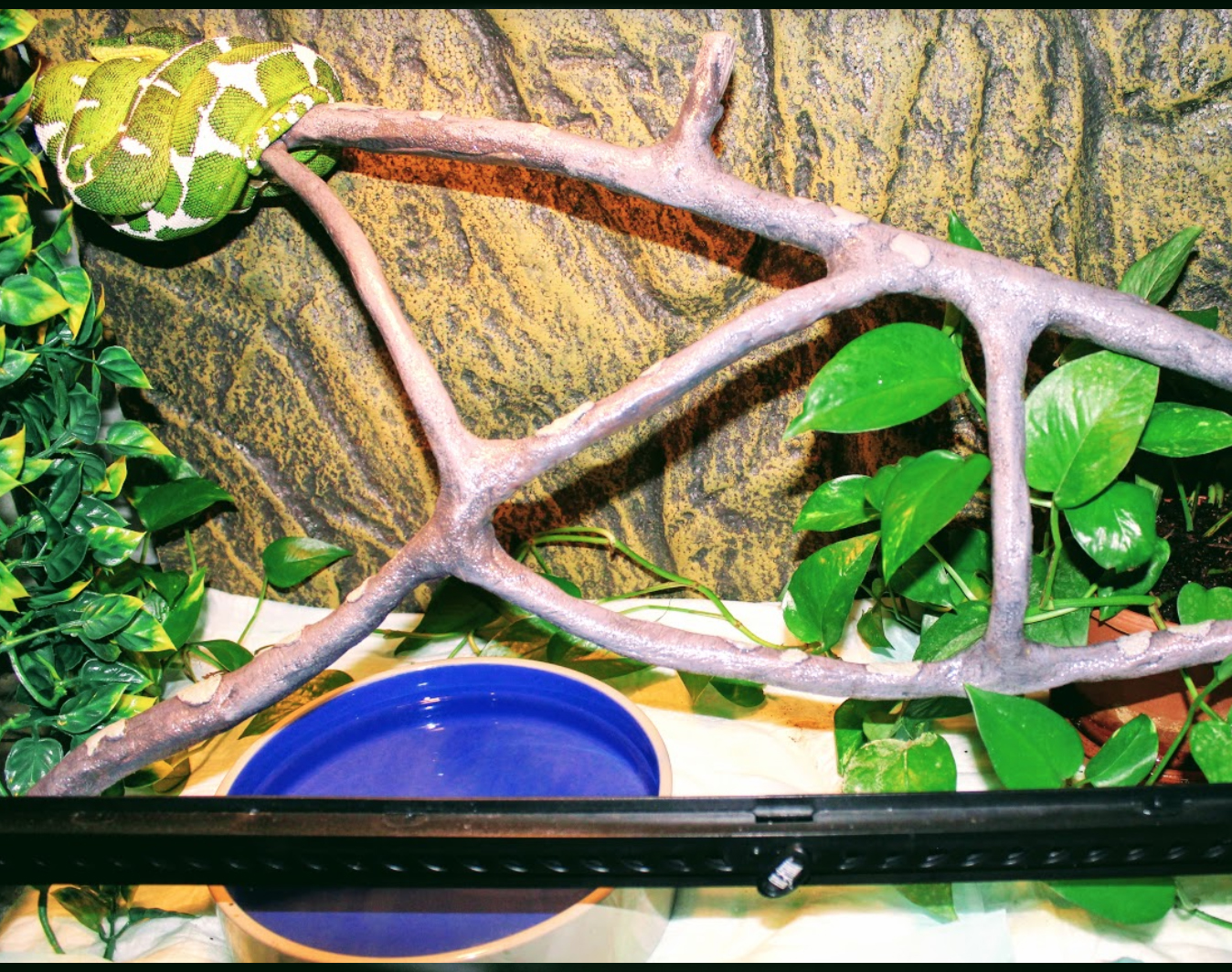 These snakes are arboreal boas therefore stay off the ground for most of their lives. Each terrarium is setup with a very natural looking perch system, created by Ron Rundo. Ron customizes every perch by hand, specific to the size of the terrarium and needs of the owner. The perches are made of epoxy resin, painted with acrylic paint then coated with semi-gloss polyurethane for durability. 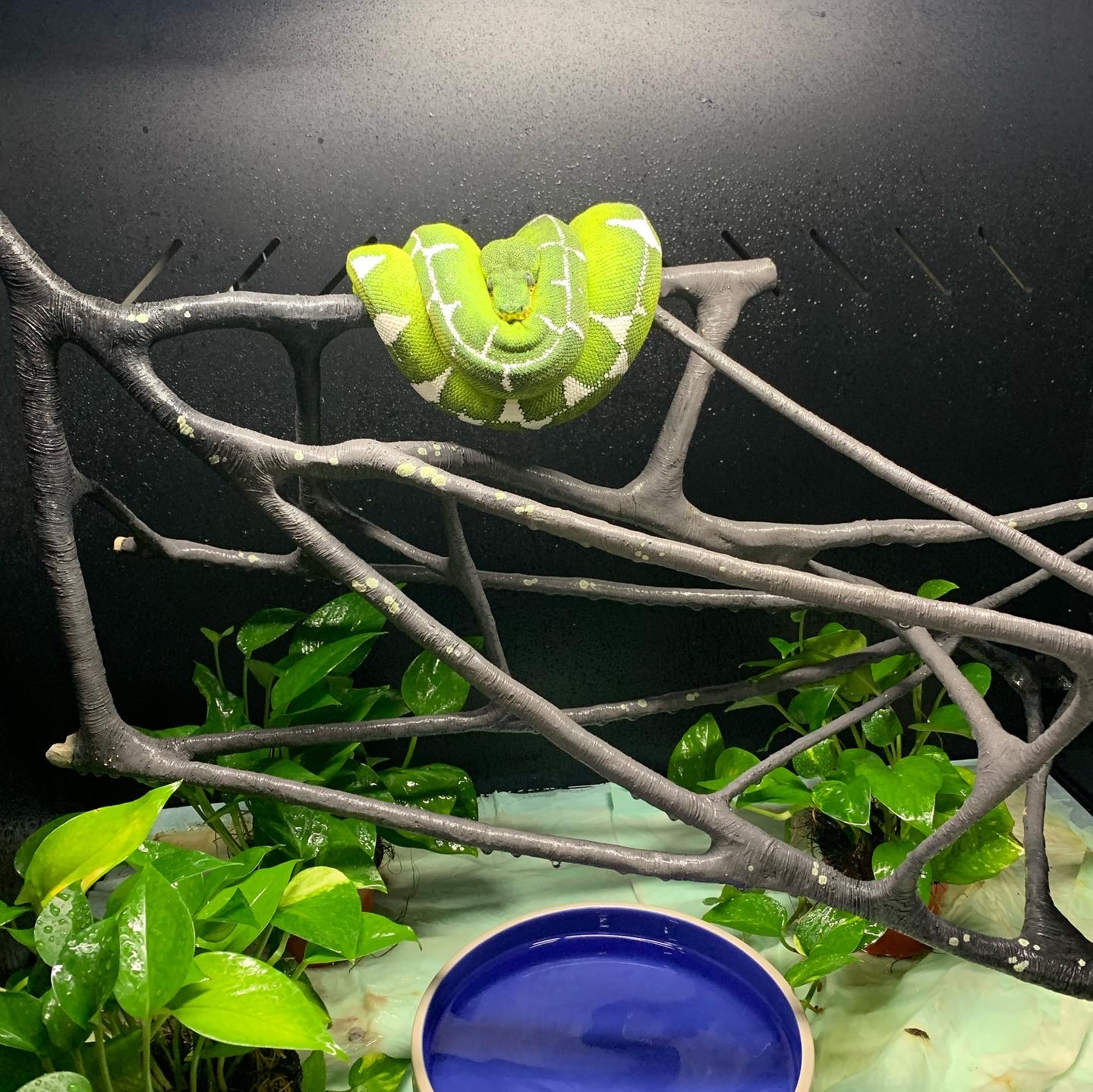 We regulate the feeding for each snake based on several aspects such as: their size and age, when was their last bowel movement, are they’re going into shed.  We always feed our animals at night.

Going into shed
1. Amazon Basins go into shed every 3-6 months depending on their size and age.
2. About 3-4 weeks before the snake sheds, you will notice a difference in their behavior. Emerald Tree Boas are nocturnal animals so they sleep all day on their perch, then are active at night. When they’re going into shed, the remain inactive during the day and night.
3. You will notice the snake fades from its natural lime green color to a dull gray tint.
4. During this time, the animal does not eat so don’t try to feed him.
5. As soon as the snake sheds, they will usually also have a bowel movement, and will be ready to feed.

Record Keeping
1. This is extremely important! If you have read everything above, then you know it’s a lot to remember. You do not want to forget the last time you fed your snake or when was their last bowel movement.
2. Record every meal, every bowel movement, every shed, when you change their water, clean their cage, everything!
3. I keep a spreadsheet of every snake and track all the above.

Stay up to date with news about our current projects and learn about the snakes that are on sale by signing up for our mailing list.

You have Successfully Subscribed!